The song titled: PANAMA LOVE and SMOOTH GROOVE come from the new EP Mission Accomplished with Latin style grooves that have sparked a new generation of jazz listeners throughout the world. Everyday independent radio stations continue to add these songs to their playlist, the overwhelming support with their radio platforms has made it possible for an artist like me to be heard. Some of these artists come from major record labels just like me and are now independent and have been producing great music. PANAMA LOVE and SMOOTH GROOVE by recording artist Joel Crafton aka Black Pinoy set the record straight with a whole new flavor of smooth jazz. A message to all radio stations if you do not have my MP3 for your station please feel free to email me at craftonjoel@mail.com or inbox me here on Facebook so you can add it to your playlist I am available for radio interviews. I congratulate all the promoters and independent radio stations that have made it possible for our voices to be heard.
Please share this post so our voices will be heard.
https://www.youtube.com/watch?v=8T5s_DrpwUE

The Weather Girls – Stand Up

My name is JOEL CRAFTON CEO OF BLACK PINOY I had known Izora Armstead for over 35 years who reformed “The Weather Girls.” It is said that the apple doesn’t fall far from the tree. Many years ago I met the talented and gifted daughter of Izora Armstead named Dynelle Rhodes.
The smash-hit titled “STAND UP” Speaks for itself for it has become a chart-busting hit on the UK charts. It is my honor to Speak of this excellent musical performance, these talented and gifted people listed in this post proves that team efforts bring on positive results. Everyone here is credited with their fantastic role in making this happened.

Here are some links where you can find this great music please support everyone in this post and buy these great songs.
https://music.amazon.com/albums/B08BT3KCRC

“The Weather Girls” are back with a dance floor filler heavenly influenced by gospel music. “Stand Up” is also a title theme that moves millions of people on our planet right now,  who feel like they are always spinning in the same loop. In 1991 Izora Armstead reformed “The Weather Girls” with her daughter Dynelle Rhodes. After Izora´s death Dynelle Rhodes teamed up with Dorrey Lyles till today.

Experience is a game changer – when it comes to music.

Experience is a game changer

Joel Crafton came from a major record label as a past EMI – artist. Today’s artist unexpectedly wondering, what, when and where the next gig will come from that will reconnect them with their fans. This coronavirus, has significantly affected the music business as a real game-changer in live performances, as some of the most skillful and well recognized artists are forced to do Facebook live concerts or some other video performances that would assure their fans that they are not forgotten. Visibility is everything in the entertainment world in the past 15 years I have flown all over the world established as a major artist performer I set myself up for this very thing. I’ve always had a strong international following and even more today it is proven to be more powerful than ever, radio Stations remembering me working for Atlantic Electra, Atco, WEA. Most of the big hit records R&B, jazz, disco,

I was one of the key people that made sure the radio stations played their songs that became hit records let it be noted. I am in no way taking full credit for their success I am merely stating collectively the people I worked for gave me the tools that have made me successful in where I am today, as a businessman record executive, music publisher writer, recording artist performer, piano player, singing in English Spanish Tagalog.  Multiple music awards. Acting skills studied under the late Tina satin the same acting coach Denzel Washington had.
Recognize as a world class martial artist with over 400 undefeated championships.  I am proud to be prodigy and student of the late, James Anthony Carmichael who produced early Diana Ross Michael Jackson and Lionel Richie who had made efforts to try to signed me with Motown records with my song She’s Sleek She’s Fine although the song did not come out on Motown it did extremely well. Motown was going through so very serious internal problems it was a blessing that James saw value in my musical ability and happy I learned some great arranging skills that will live with me forever.

INTERNATIONAL recording artist JOEL CRAFTON a.k.a. Black Pinoy brings a whole new flavor as a guest appearance in your already existing singing groups and bands. It is an honor to be recognized for the work we do and it is a pleasure in teaming up with you. If you are in North Carolina South Carolina Georgia. I am ready to be on the roster of your gig. Jazz- R&B – Gospel.

As I travel the world it is a blessing to be recognized for the work that I do. As I hear people singing my music as far away as Malaysia as I thank you for your love and support always your friend celebrity black Pinoy. #blackpinoy.com #https://www.facebook.com/blackpinoytoursmusic/

Learn the Ways of love

ON THE RADIO – Joel Crafton

The  Radio stations are picking up this great  Gospel Song
I Come To  You Jesus Broken Down. By Joel Crafton aka Black Pinoy. 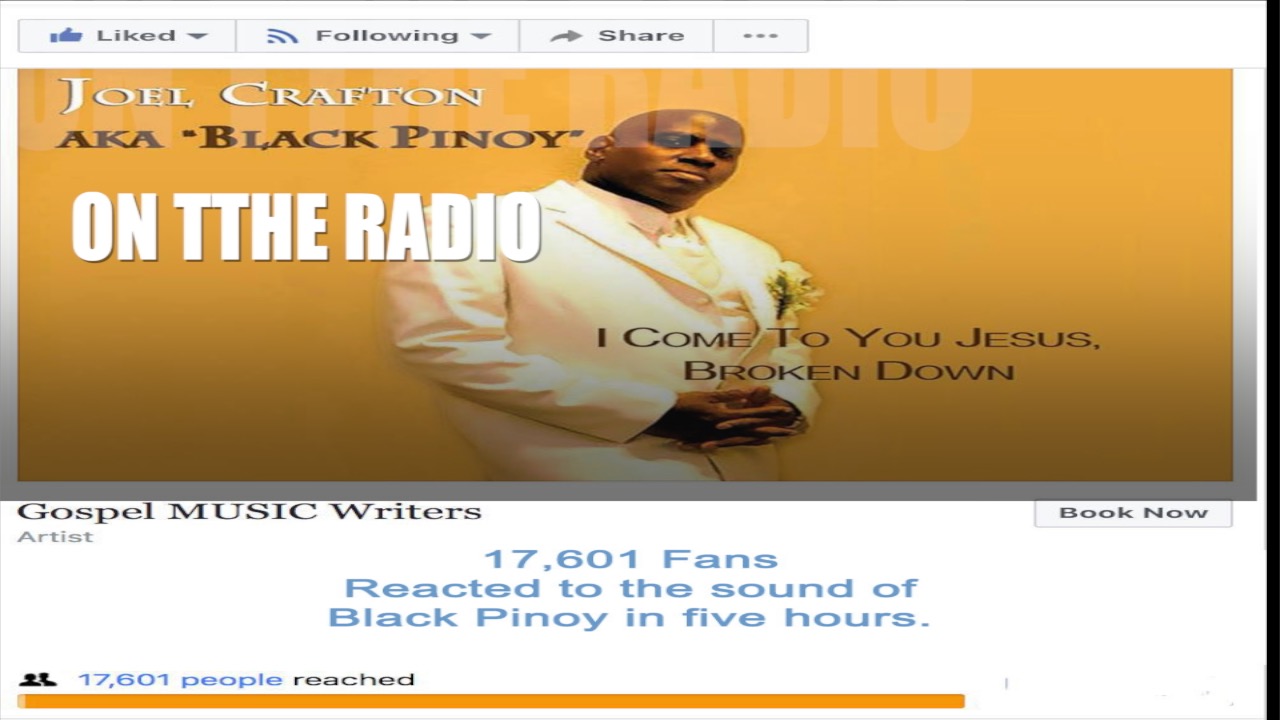